to move: press or hold the arrow keys

to not move: do not press or hold the arrow keys

to dig a hole: press space

to not dig a hole: do not press space

to rest: do nothing for a time

to sleep: rest for a time

I tried to climb to an upper screen when I realized you can move the ladders around. A fire fell down and onto my ladder and kept burning the platform I had tried to move to. Not understanding how fire works in the game, I tried placing a block on it to extinguish it and was met with a particle effect. I tried digging again and got stuck in a hole with the fire. I now understood that I had put the block in the fire and burned the block, but too late. My only choice was to dig down. I thought, maybe I'll find a void that I can move sideways in and get out of there. I didn't get out.

10/10 would attempt to explore again

This is the good kind of crazy.

if this gets ported to playdate, yeah

really damn cool. alongside saving, more map varieties would be appreciated methinks, like an underground catacombs with different props or beasties once you've dug past a certain threshold, or a star layer after you've been going up into the clouds for a while.

the way i see it, since our prospector dude has been established to be curious, that curiosity ought to be built upon!

Something to create some sense of progress would be cool, like new map areas or some indicator of how high you are.

Alternatively, if the innocent exploration aspect is kept instead, rare and weird blocks/events on a small number of screens would also keep the game fresh for a lot longer.

Right now I think everyone who starts climbing up is hoping for either something to change or some in-game recognition of their progress; if people knew there was nothing up there I doubt anyone would climb so high just for fun.

I really enjoy this!
It kinda reminds me of "playing pre-release Minecraft for the first time as a kid who knew nothing about it": not using a wiki, just making things out of dirt, not knowing any crafting recipes... (this is a good thing!)

I didn't know about how to actually get fire to spawn reliably & these tricks to get infinite ladders (well, when I started actually playing without the debug commands):
so while I was playing, I enjoyed having to really decide between using ladders in the sky (which seemed to be an easy way to get more ladders) vs. using ladders in the ground to ... dig hole solely because the name of the game tells me to dig hole.

The limitations of digging (ie. when the block is above a pit / when a ladder is in the tile) make it interesting enough when trying to solve how to make a perfectly straight ladder shaft.

And due to the fact I didn't really know how to spawn fire, it became a rare resource for me: when it appeared, I made sure to use it to clear out large areas just so that I could fill them with blocks when digging later on.

Which kinda brings me to my main gripe: you can move super fast by tapping the arrow keys, but this really messes up your wrist 😅
(and if you wanna clear out a large area with some fire you'll be smashing buttons a lot).
Would it be possible to add a modifier / toggle which makes you "run" (ie. move at that speed in a straight line from just holding keys instead of having to tapping them)?

ps: I figured out most of the border pattern myself before I stopped! I'm still a little unsure on what the "anchor"(?), "outlined square", and "microchip"(? which seems to render on top of the local radar unlike the other icons?) icons mean, but I understand the local radar itself & eye/dig/fire icons at least 😃

I feel the same, was very fun discover how stuff worked testing

What I've found so far:

Not figured out yet:

this is all very accurate!

i will answer any of the "not figured out" questions you'd like, though i don't want to spoil it if you're getting something out of working them out on your own.

Oh please do! I spent a few hours and reached the limits of my intelligence creating the list above.

Edit: especially if you can reveal what the colors around the edge mean. Someone else on here posted that they have some significance.

Heya, I would still be interested in the explanation of the dots, worms, and line around the screen if you're still up to share.

this is really beautiful. i rested for a while up in the sky, and when i saw that the rain cleared away the fog i think i gasped out loud

i remember you posting on twitter about the repeating patterns around the edge of the screen but i can’t remember or work out what they represent. the rules for when you’re allowed to dig out a block are also still kind of mysterious to me; i fell down from the sky a few times, but i haven’t yet figured out a way to dig down into an existing space without digging out a big pit next to it

Built my way around the sky and dug my way through the ground. Cheated flames to dig down quickly and got stuck so I watched the little hat fellow rest and fall asleep by the fire as the worms and cave raptors did their thing.

I worked out a few tricks like breaking floating ladders as a quick exit downwards, but I couldn't figure out what to do for getting stuck in a deep hole or standing on a block which is vertically between two ladders.

i have considered adding a "return to surface" key in case people get stuck- currently you have to use the ladder / tunnel "cheat" keys to extricate yourself (which might not be desirable, and currently isn't always a fix).

cool and neat! little confusing at first but still cool
would be nice if you could save and reload later

thank you- i would be curious to hear about how people feel about figuring out the game. the goal is for it to invite curiosity rather than being confusing or inaccessible.

RE: saving- i agree, and am definitely considering it as a later addition.

I too hanker for saving. Got a bit Shawshank Redemption in my run and felt like I'd need a few more hours to dig my way out of the mess I'd made.

Wow, I love the atmosphere!

Lots of interesting stuff going on.

(Digging seemed to alternately remove a block, then re-add a block, repeat... which confused me!)

Keen to see more of this strange little land!  :D

thank so much! i'm glad you got something out of it. to clarify the digging behavior: you could think of it as having a pocket which stores exactly 1 stone. (the little circular indicator shows if your "pocket" is full.)

I don't know that "dig" is a very accurate description for that metaphor! :D

I wonder if the character could be shown holding something when their hands are full?  Or, sort of on their back or something?  Random ideas. 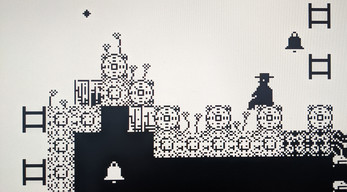 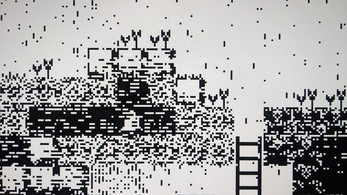 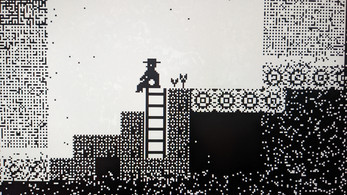 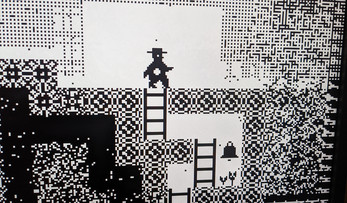 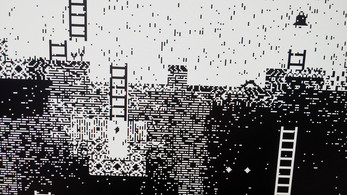 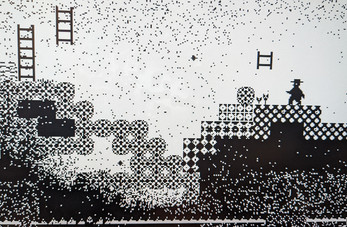 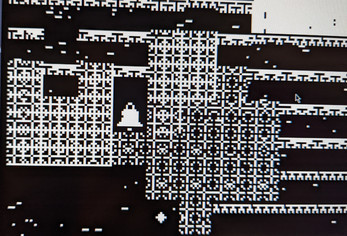 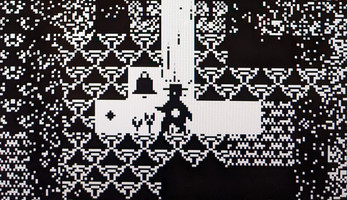 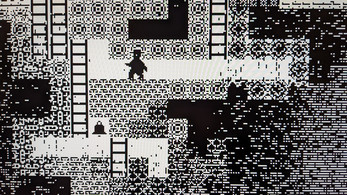